The BIS report Open Access: Fifth Report of Session 2013–14 was heavily researched and offers a wide-ranging insight into the current state of open access. This blog cherry picks some of the useful aspects of the report with additional commentary if relevant.

This blog is the second of two looking at the BIS Report. The other – “BIS Report part one: Finding & implications” – is available here.

The blog covers under the headings: Supporting arguments for open access, Amount of research being made available, and Does green open access threaten subscriptions?

We would like to note that the AOASG has had some (indirect) input to the BIS report. The report referred to “reports of a UK publisher in social sciences switching from a zero embargo policy to require a 24 month embargo, citing its accordance with the recent change to UK open access policy” (par 46).

That evidence was the Richard Poynder article ‘Emerald’s green starts to fade‘ which in turn was triggered by the AOASG blog ‘Walking in quicksand keeping up with copyright agreements’  Heady days indeed.

The report contains some useful information that could be employed in various discussions around open access.

The first was the statement that public funds are used three times in the research process:
• “to pay the academics who conduct the research
• to pay the salaries of the academics who conduct the peer review process, and finally
• to pay for access to this research through institutional journal subscriptions, which is the dominant business model in the scholarly publishing market”. (par 12)

There is also a very useful graph comparing the growth of serials expenditure mapped against the consumer price index from 1986 – 2010: 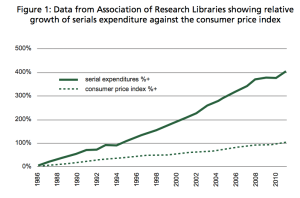 Given the concern that the money being invested by the government in research is being diverted into publisher profits, the report notes the increase in Elsevier’s profit margin, which was 34% at the time of the original 2004 House of Commons Science and Technology Committee Report on open access. It was 37% by the time of this BIS report. (par 15)

Amount of research being made available

There were some interesting facts and figures relating to the percentage of work available open access in the UK.

The first fact was that compared to a worldwide average of 20% of research available open access, “the proportion of the UK’s total annual research output that was available through open access in 2012 was about 40%” (par 20).

COMMENT: This is excellent for the UK. We do not have comparative information in Australia, although we are working on a method for determining this. Currently there is information collected that indicates the total number of items that are available, but this does not answer the question: ‘what percentage of work published in the previous year is available in a repository open access the following year’.

Even more illuminating was the fact that “Green currently provides seven-eighths of the 40% of the UK’s research outputs that are open access” (par 22).

The BIS report is stating that 87.5% of UK research is being made available in this manner. It also states that the Committee: “received strong evidence that Green is dominant internationally, with the latest data showing that Green accounts for about 75% of all open access worldwide” (par 33). This is a dramatic and impressive endorsement for the efficiency of green open access.

Note the UK numbers are dwarfed by the “University of Liège in Belgium (collecting 83% of its annual outputs in its OA repository)” (par26). This is because the university has directly aligned open access to their promotion system. The report noted that compliance with mandates is higher if it is “a condition of funding compliance and if deposit is linked to institutional performance evaluation, research grant applications and research assessment” (par 26).

Far from threatening subscriptions, it might be the case that having work in a repository acts as a promotional tool for the subscription journal: “The €4 million EU funded PEER (Publishing and the Ecology of European Research) project (2012) showed that traffic to journal websites increased when articles were made available through a publicly accessible repository, possibly because interest grew as articles were disseminated more widely” (par 44).

The BIS report noted that “there is no available evidence base to indicate that short or even zero embargoes cause cancellation of subscriptions” (par 44).

COMMENT: Indeed, the only ‘evidence’ to support the claim that immediate green open access threatens the ‘sustainability’ (read: profit) of commercial publishers comes in the form of the exceptionally questionable ALPSP survey sent out early last year to librarians http://www.publishingresearch.net/documents/ALPSPPApotentialresultsofsixmonthembargofv.pdf . Heather Morrison wrote a piece on the methodological flaws with that survey http://poeticeconomics.blogspot.com.au/2012/06/publishers-association-survey-on.html

And yet, when questioned earlier this year by Richard Poynder, this is what Springer referred to as their ‘evidence’.

There are, however currently two clear opportunities for the industry to collect some actual evidence either way (as opposed to opinions on a badly expressed hypothetical):

1. Taylor & Francis have decided to indefinitely expand their trial of immediate green permissions to articles in their Library & Information Science journals. If they were to run a comparison of those titles against the titles in, say , three other disciplinary areas over two to three years they would be able to ascertain if this decision has made any difference to their subscription patterns.
2. Earlier this year (21 March) SAGE changed their policy to immediate green open access – again this offers a clean comparison between their subscription levels prior to and after the implementation of this policy.

If it is the case that immediate green open access disrupts subscriptions then we can have that conversation when the evidence presents itself. Until then we are boxing at shadows.