The world’s greatest scientific collaboration comes to Brisbane, Australia today with the opening of the Hadron Collider exhibit at the Queensland Museum.

The Large Hadron Collider (LHC) is the largest, most powerful particle accelerator ever built, consisting of a 27-kilometre ring of superconducting magnets which sits in a tunnel 100 metres underground at CERN (European Organization for Nuclear Research) in Switzerland.

The project was dubbed the biggest science experiment of all time, and has involved thousands of scientists funded by hundreds of universities and governments around the world.

One of the most significant outcomes of the collaboration has been the very deliberate focus on ensuring the findings are available freely and openly.  The sciences have been leading the movement towards Open Access (OA) and an increasing number of Australian research organisations including universities, the Australian Research Council (ARC) and the National Health and Medical Research Council policies have OA policies.  The Australasian Open Access Strategy Group (AOASG) advocates on behalf of its member universities who are based in Australia and New Zealand and its affiliates to promote OA through collaboration and raising awareness.

One of the biggest discoveries to come from the LHC was in 2012 with the discovery of Higgs boson elementary particle – it was last remaining particle from the Standard Model of particle physics to be observed.  Australian Professor Geoffrey Taylor  (pictured below) is a director and chief investigator at the Centre of excellence in Particle Physics (CoEEP) at the University of Melbourne.  He was heavily involved in the Higgs boson discovery along with many other Australian scientists and said it came after decades of inquiry around across the globe.

“It was a very fundamental discovery, and it was a component of the Standard Model which was missing, but through this building of the Large Hadron Collider scope, its higher energies, higher intensities, we were capable of discovering the Hicks and we did.

“So that was a massive step forward for understanding the fundamental basis of the universe, and what particles are made of and what their basic interactions are.”

Professor Taylor said this LHC exhibition presents science on industrial scale, and that has benefits in the community.

“First of all it drives this collaboration for ventures in science and engineering, but on the other side of the coin, it involves major industrialisation and commercial involvement, and knowledge transfer.”

He said there is a large amount of technology which comes out of this research which is all publicly funded.

“Something like two or three times the turnover of what it would cost…. which I think it’s important for the public to know, it’s not just a drain … it generates growth.”

Much of the research being extracted from experiments using the LHC is made available around the globe via Open Access initiatives.

According to Dr Salvatore Mele, from CERN (pictured below), research in the field of physics has always been openly available. 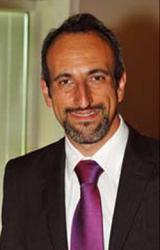 “For more than half a century, researchers mailed each other hard copies of preprints, preliminary articles they had submitted for publication”  Dr Mele said, and now there are repositories like arXiv.org, all around the work hosting millions of  Open Access articles and preprints.

“Thanks to our Open Access initiative SCOAP3 (Sponsoring Consortium for Open Access Publishing in Particle Physics), most of the articles in the field are also Open Access in their final peer-reviewed published version.

Dr Mele said that by aligning the mission of researchers, libraries, funding agencies and publishers it is possible to remove access barriers.

“Just imagine if all medical research was available to any single medical worker anywhere in the world,” he said.

Dr Mele said the impact of these scientific discoveries being available freely and openly has enormous impact on the research community.

“We have a way to measure how often these ‘preprints’, preliminary articles in our field, cite each other. This means that by being openly and freely available,ideas can spread before being formally published: we see that these citations happen up to one year before the day in which articles are published.

“Another way to measure impact is how often scientific articles are downloaded. While you cannot be sure this means someone has read them and got an idea – that of course cannot happen if you do not read the articles. We have been amazed to see that journals that SCOAP3 has made openly accessible on publisher web sites are downloaded twice as much as before.”  Five Australian universities are part of the consortium that supports SCOAP3, including two in Queensland, Queensland University of Technology (QUT) and Griffith University, as well as ANU, The University of Melbourne and the University of Western Australia.

Dr Mele said the research community should not only share their work with peers in other disciplines, they should engage with libraries and funding agencies to support Open Access as part of the investment in research.

There is increasing pressure by funding agencies at national and international levels to embrace Open Access, Dr Mele said.

“Large charities, such as the Wellcome Trust and now the Gates Foundation, have been instrumental in moving this agenda and raise awareness in important areas in the life sciences and medical research, among others.

“In Europe, governments have agreed in the importance of Open Access in particular and Open Science in general: in May this year ministers of the European Union Member states concluded that Open Access should become the default for scientific publishing.

He said there are no negatives in making research open to everyone for free.

“In some fields there is hesitation about using them [open access journals], their reputation, and how to pay for them. In our field we see that research published in Open Access journals is downloaded twice as much as before, and by virtue of the fact that authors do not need to pay for this service, there are neither barriers nor hesitations,” Dr Mele said.

The Hadron Collider: Step Inside the World’s Greatest Experiment opens at the Queensland Museum & Sciencentre on December 9.