Comments on this month’s news and suggestions for inclusion in the next newsletter, planned for October, are always welcome.

ORCID adoption in New Zealand
New Zealand is joining the wave of countries to support and adopt ORCID. On July 26 New Zealand’s peak bodies representing the scientific and research community, along with funding agencies, released a joint statement of principle supporting the adoption and use of ORCID identifiers across the research and science system.

Big Business rally’s against data sharing
Australia’s largest enterprises are lobbying against the possibility of new regulations governing the sharing of data, arguing they should be allowed to come up with such arrangements on their own.

Call for OA study tenders
The European Research Council Executive Agency (ERCEA) has published a call for tenders in relation to a study on open access to publications and research data management within ERC projects.

EU “link tax” concern
The “introduction in EU law of a related right covering online uses of news publications” is exactly what civil society groups like Save the Link are criticising as a link tax.

How to support OA journal Editors & Publishers
Raising visibility of their journals on the Web: Serbian journal editors take part in one of four popular edit-a-thons at which they created entries for their journals on Wikipedia.

Status of OA in Nordic countries
Nordic Open Access policies and guidelines that are harmonised in relation to each other could make research more visible with wider international impact.

The National Library of Sweden has signed an agreement with Springer, which KTH royal Institute of Technology has joined. More than 1650 hybrid journals are included in the agreement.

eLife reveals publication costs
Life sciences journal spends just over £3,000 per article, and has challenged high-profile rivals to release details of their costs 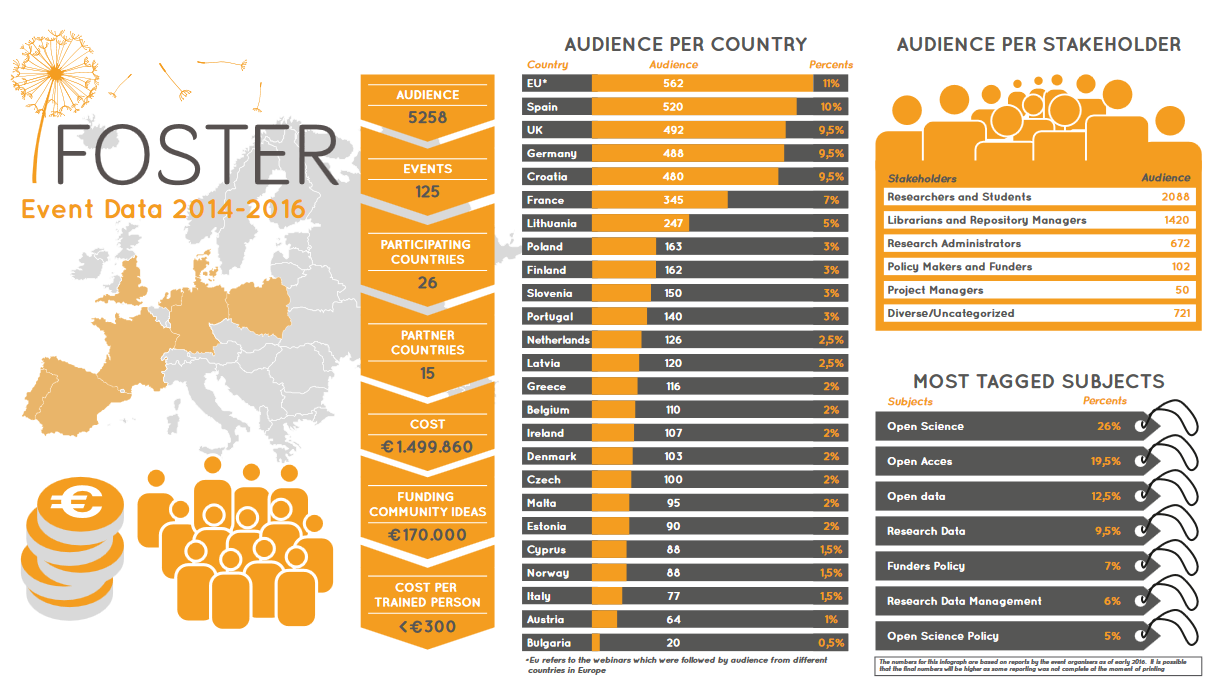 Elsevier patent shock
On August 30, the Patent Office issued U.S. Patent No. 9,430,468, titled; “Online peer review and method.” The owner of this patent is none other than Elsevier, the giant academic publisher.

Publisher charged with deceiving researchers
The US Federal Trade Commission has charged the publisher of hundreds of purported online academic journals with deceiving academics and researchers about the nature of its publications and hiding publication fees ranging from hundreds to thousands of dollars.

Publishers of fake journals charged in Beijing
And in another move, this time in China, a pay-to-publish chain of fake academic journals has been shut down and its operators now face charges.

NASA launches OA portal
NASA is the latest of the  US funding agencies to announce its policy on Access to Federally Funded Research – a list is maintained by SPARC. NASA’s is especially interesting, as it is to be delivered via a repository managed by PubMed Central, and is called “PubSpace”.  They note specifically “Papers available through publishers’ web sites do not fulfil the authors’ obligations under the NASA Public Access Policy.”

And in other international news…

Thomson Reuters blog on paying for OA APCs
A blog that discusses the Pay It Forward project from UC Davis and California Digital Library: Investigation of the Institutional Costs of Gold Open Access

De Gruyter Open author survey
Examination of the attitudes of academic authors around the world towards open access publishing, including their experiences.

Sci-Hub website causing major controversy
Sci-Hub is viewed by the publishing community and many authorities as a major pirate of copyright protected material while at the same time, seen by the global scientific research community, especially those located in less affluent nations, as an essential source of information. This blog takes a look at it from a legal standpoint.Open access papers always attract more citations
A study on citations by 1Science of 3.3 million papers indexed in Web of Science published between 2007 and 2009 found increased citations across all fields. In agriculture, for example, the average citations of OA papers was 35% higher than of non-OA papers.Going beyond impact factors
While the “publish or perish” culture in science won’t break bones, it does have a negative impact – the prevalence of scientific fraud. A view from an academic at the frontline of publishing

Indian Uni launches Open repository
NUV institutional digital repository has been created to collect, preserve and distribute the scholarly output of Navrachana UniversityPalestine Unis launch OA project
Four universities in Palestine will work with universities in Europe and EIFL to set up open access repositories that will open up their research to the world

Mike Wolfe of the Authors Alliance will be coming to Aotearoa for a few days this month. He’ll be speaking a variety of events, listed here.

InternetNZ has announced three NetHui events for 2016: Nelson on 13 October, South Auckland on 15 October, and Rotorua on 17 October.
OpenTrials to launch at Berlin World Health Summit
The launch of the OpenTrials project in which Open Knowledg

e is developing an open, online database of info about the world’s clinical research trials will take place at the ‘Fostering Open Science in Global Health’ workshop 10/10/16.

Open Con will be on 12-14 November in Washington, DC, with satellite events hosted around the world.

The theme for this year’s 9th International Open Access Week, to be held October 24-30, is “Open in Action.”

We will be hosting a page at aoasg.org to highlight regional initiatives and will be featuring them in the newsletter next month. Please email eo@aoasg.org.au with any you want added. You can also add events directly to the list of global OA week events which is here.

Open Access and the Humanities: Contexts, Controversies and the Future published by Cambridge University Press, offers a background to open access and its specifics for the humanities disciplines, as well as setting out the economics and politics of the phenomenon. Preface by Peter Suber.

Measuring Altruistic Impact: A Model for Understanding the Social Justice of Open Access

Literature Review on Shifting Journals to Open Access | Inside Higher Ed
A literature review on converting scholarly journals from subscription to open access has been published by the Harvard University Office for Scholarly Communication.

We can’t cover everything here! For daily email updates the best ways to keep up to date is the Open Access Tracking Project.

The newsletter archive provides snapshots of key issues throughout the year.